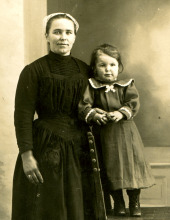 Born in Plounévez-Quintin, she grew up in a poor family of daily agricultural workers where singing played a central role. Daughter of singers, she acquired the style and repertoire of her parents made up of songs to listen to, dance, and walk. She performs publicly from the age of 12 during vigils, fairs, weddings, sometimes accompanied by her father or her sisters.

In 1902, aged 15, she married a clog maker from Saint-Nicolas-du-Pélem, Vincent Bertrand (alias Mathurin or Matao) and at the age of 17 gave birth to the first of their six children. They live in a hut (lochenn) with very rudimentary comfort in the middle of a beech grove, hence its nickname "Josée du bois", and change locations according to the sites. Marie-Josèphe then learns to know medicinal plants and exercises her healing talents.

In 1919, with her husband back from the war, they moved to Canihuel as clog makers. In 1924, Madame Bertrand opened a café. She sings according to her desires and sometimes to animate gatherings. When the first "modern" fest-noz were organized, her son Guillaume took her to participate in competitions where she won prizes.

Her repertoire was collected by Claudine Mazéas between 1959 and 1965, among which her interpretation of Skolvan's gwerz will remain famous.

Many Breton musicians consider her to be an exceptional singer and her performances are a source of inspiration for many of them. Various records and publications, notably edited and published by Dastum, are devoted to him.

Photo: Madame Bertrand with her daughter Madeleine, in 1915 or 1916 © Michel and Nicole Sohier ; Madame Bertrand eand her grandson Guy, in 1935 at Canihuel © Paulette Simon-Bertrand